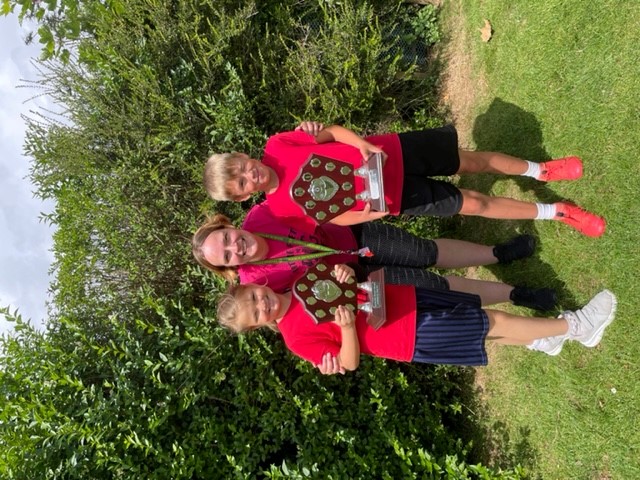 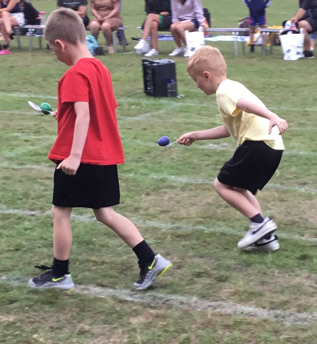 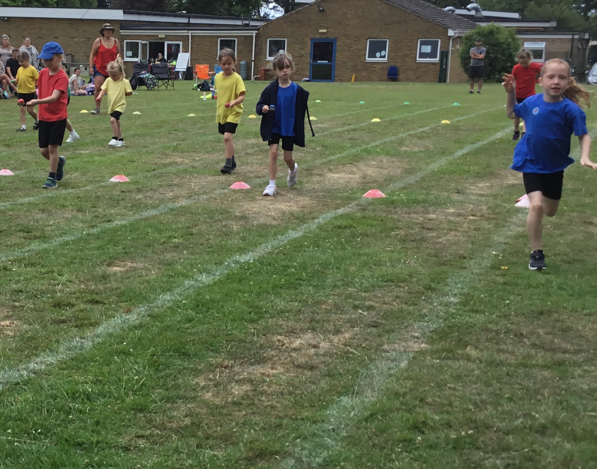 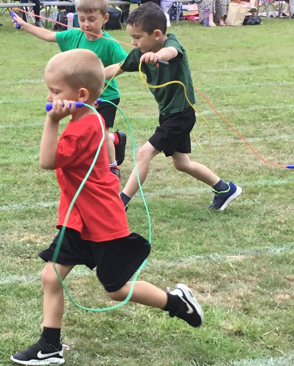 After a whole week of trying some new super sports, on Friday, it was finally Sports Day. First, we did a relay walk around the village carrying our ‘Olympic Torch’. Years five and six then lined up on the driveway opposite each other and we made an arch for the younger years to walk through. Next, we all went up onto the field and did our Zumba dance to ‘Green Green Grass’ by George Ezra to officially begin Sports Day. Then the juniors got into their relay teams  (consisting of a group of 4 year three and four girls and boys and same for years five and six) to participate in the relay races.

While key stage one were doing running, skipping, egg and spoon races etc, the juniors headed over to the other side of the field to do mini games. These included the following: Tug of War, Domes and Cones, Dodgeball and Benchball. In Tug of War you have two teams on opposite sides of a long rope. You then have to pull it over a certain point before you win. In Domes and Cones, two teams have turn some cones over a certain way either creating a cone or a dome. The team with the most cones turned their way up wins. In Dodgeball, there are around five balls and two teams, and you have to throw the ball at people on the other team to get them out but it doesn’t count if the ball gets your head. The team that has got has got everyone out on the other team. Another way you can win is having the most people on your team when time in up. In Benchball, you have two teams with one of them on a bench on the other teams side, you usually have two balls and you have to throw them to the person on the bench. If they catch it you then go and join them on the bench. You win by having everyone on your team on the bench or if you have the most people on the bench after time is up.

By this point, the infants had finished their races and the juniors went over to the running track to compete in the sprints.  We were split into rows (groups) of year three girls and year three boys and so on. Then it was time for the long distance. Years three and four did one and a quarter laps of the field whereas years five and six did two and a quarter laps of the field. After that, Mrs McCluskey announced the winners of Sports Day. In key stage one  Brown (red) won and surprisingly it was the same for key stage two.

For lunch, we had a picnic but also school dinners were available and you could also get free pizza and other tasty things. Once we had finished lunch, we played on the field for a bit before going back inside to our classroom for registration. Our parents then had

the choice on whether they would take you straight home or look at your books while you played. We coincidentally saw the Red Arrows flying overhead too.

Thank you for reading. We hope this gave you a good idea of what Sports Day was like.

After lots of amazing activities, Lenham Primary ended the week with a fantastic sports day, which the parents could come too. It has been a long, long time since we’ve been able to do sports day the Lenham way.

The day started when we carried the Lenham Primary 'Olympic’ torch around the village, passing it along to each individual pupil in turn. Year 6 carried it to the square, then Year 5 carried it outside the cricket pitch, and so on, until Year Rs had paraded it back into the school.

Once in school, everyone performed a Zumba dance for the parents, and it was thoroughly enjoyed. We danced to the song ‘Green Green Grass’ by George Ezra, and after KS2 and KS1 split up to do separate activities.

While KS1 enjoyed some fantastic classic races, KS2 started with some relay races. Each house (Daley, Brown, Steadman and Storey) got into teams, and competed against one another. Then each class took it in turns to do the following mini games: Tug of war, Dodgeball, Benchball and Domes and Cones. All of these delighted students, parents and even teachers! Soon after, the sprint races began. In a specific order, all ran against each other on a 100m track! Next was the long-distance race, which all the children struggled with, but at the end felt proud that they had achieved such a task.

The awards for KS2 and KS1 were both awarded to Brown house, and afterwards children could enjoy a lovely lunchtime with their families at a picnic! Even our food company Nourish joined in the fun by making goodies for everyone! Soon after, parents were allowed to look at their children’s books and wonderful work, and then there was an option where you could leave school early! Of course, most children were given this opportunity, which ended the Lenham Primary 2022 Sports Day perfectly.